Cal Lutheran’s Proximity to the Entertainment Industry Allows Students Access to Valuable Career Resources, Including Internships in Film and Television Where They Gain Experience and Make Connections. Meet Five Recent Graduates for Whom the Film & Television and Multimedia Programs Have Paved the Way to a Rewarding Career.

Internships and Independent Study: Experiential learning is required of all majors. Cal Lutheran has developed internships with ABC, CBS, Disney, Fox Sports, KTLA and other companies based in Hollywood. A strong alumni base working in the industry for companies including Bunim-Murray Productions, ESPN, Netflix, the NFL and Participant Media provide valuable networking opportunities.

Festivals and Competitions: Film and TV majors organize the Cal Lutheran Annual Film Festival, now in its 24th year. Many students produce films for a screening festival and a 48-hour competition on campus.

I’m excited to be able to offer this new major at a time when the industry is creating so many new opportunities with companies like Netflix and Amazon. It will provide students the opportunity to learn from faculty who have worked in the industry and train in Cal Lutheran’s on-campus television studio and on locations using equipment with the same high- quality production value as those used by industry professionals. 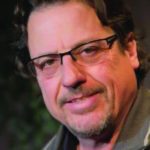 “I’m passionate about finding the stories in the edits. Finding where the thread is—that’s the fun part. It’s like solving a puzzle.”

At Cal Lutheran, Raigoza—a multimedia major—interned at the up-and-coming production company Bandito Brothers. It became a baptism by fire! He did everything from offline editing to the finishing processes of online, mix, color and conforming. By the end of his senior year, he’d worked on his first major motion picture, Act of Valor.

Over the next five years, Raigoza worked as a compositor on The Hunger Games: Mockingjay–Parts 1 and 2, a VFX artist on Avengers: Age of Ultron and Captain America: Civil War, and more. He now works for a prominent commercial house and recently finished editing a global Adidas campaign in Amsterdam. 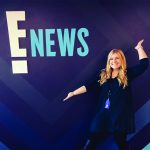 “My current job allows me to work as a producer, production assistant, editor, graphic artist, writer or anywhere in between. Cal Lutheran prepared me for this by structuring the classes and projects to make me wear all those hats.”

During her senior year, communication/ film & television major Jones worked
as a digital video intern for E! Online and Digital. She decided she would act more as a production assistant than an intern, working with the digital video team and the Snapchat Rundown team, editing bits and pieces, and making captions for the show. This led to a job offer as a production assistant for The Rundown right after graduation. Lately,
she has been diving into editing and recently edited her first Rundown segment. 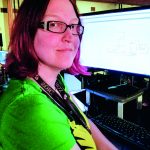 “You have to love it because it’s a very demanding industry. You have to be able to see yourself in front of the computer at 4 AM throwing practical elements onto CG (computer graphics) because you’ve got to ‘make something work’ by
9 AM the next day.”

Cal Lutheran helped place Amzoll, a multimedia/visual effects major, at Mechnology after graduation. She worked as a digital compositor—the last step on the VFX pipeline—for about 18 months, and then moved on to Zoic Studios as a roto/paint artist. Amzoll joined True Blood as a digital compositor and stayed with the show for 52 episodes. She also became a sequence lead on Once Upon a Time for several seasons, and worked on Homeland, The Get Down and Hand of God. 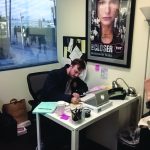 “Nothing can prepare you for what an actual production feels like—that hurley-whirley monstrosity must be experienced to be understood. Working on campus films, though, taught me a lot about the different jobs on a set and gave an understanding of how they work.”

After graduating with a communication/ film & television major, Wardle did a three-month unpaid internship at a tiny production company in Silverlake called Imaginaut, where he did a great deal of editing and production assistant (PA) work. The company hired him for quite a few gigs following the internship. Wardle did a lot of networking, as well, and one of his meetings turned into a four-year job as a PA, and later as a script coordinator (SC) for Major Crimes, until it was cancelled. His contacts at Major Crimes hired him as an SC for Tell Me Your Secrets and Why Women Kill. 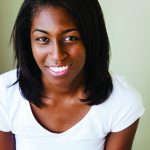 “At Cal Lutheran I gained a solid under- standing of the filmmaking process, from writing to editing. Knowing my way around a camera, lighting equipment and editing software allowed me to lend a hand on smaller projects when looking for my next film or television job.”

While a student, Ray, a communication/film & television major, completed a research project with faculty mentor David Grannis to track the prevalence of exclusionary practices in casting films and to find con- tributing factors. They viewed top grossing films between the 1930s and the 2000s, charted characters with a distinguishable speaking role, and noted their importance in the film, their race and their sex. Film in- dustry professionals and scholars were also interviewed. Findings suggested changes in marketing strategies and evolving culture will allow for more minority representation.